in Education, Entertainment
Reading Time: 3 mins read
A A

Kenya National Theatre is part of the Kenya Cultural Centre, a Semi Autonomous Government Agency under the Ministry of State for National Heritage and Culture in Kenya. It is mandated to offer space for the rehearsal and staging of productions to both local and international repertoire.

It is based in Nairobi along Harry Thuku Road and borders the University Of Nairobi (UON), The Kenya Broadcasting Corporation (KBC) and The Fairmont Norfolk Hotel. 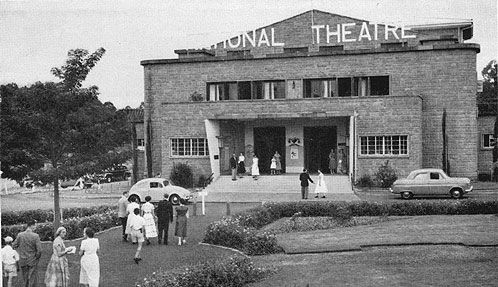 The history of the building has viewed its location as a hurdle for an earnest identification with the local artistic performances. The cost of maintenance has meant higher booking fees for fledgling repertoires, eventually reserving itself for a corporate clientele. The Kenya National Theatre has also been a subject of scholarly criticism and a basis for formulating a cultural policy.
Harry Thuku Road | Kenya Cultural Centre, Nairobi, Kenya

Located along Harry Thuku road in Nairobi, the Kenya National Theatre is subtly fitted among iconic landmarks like the University of Nairobi and the Kenya Broadcasting Corporation offices on its adjacent sides and the Norfolk Hotel on its opposite. The first cultural facility to have been built outside the commonwealth, KNT is part of the Kenya Cultural Centre (KCC) mandated to offer space for the rehearsal and staging of productions to both local and international repertoire in Nairobi. The planning for the building began in 1949 when a steering committee made up of British and Indian settlers requested the colonial government to set up a place where they could express themselves in music, drama and arts. This call was repeated a year later prompting the British government, through its colonial offices in Kenya to initiate the project that saw the construction of the first and now the oldest cultural institution via a statutory parliamentary Act (Chapter 218 of 1951).

A piece of land was provided along Harry Thuku Road for the two-phase construction of the centre. The location was guided by the need for safety since the area was a no-go-zone for Africans who were at that time restricted to Eastlands and could not go past Gikomba.

The first construction phase involved setting up a 450-seater hall that could host musical and dramatic arts, and dances.

Being a national landmark and a key feature in the city, its interiors reflect the national colours including red, black, green and white and hence the need for the architect to work with the theme. From the last renovation about a decade ago, the timber on the walls was painted black, the timber on the top dark green and the seats were red. In the spirit of conservation, the architect reused the painted timber exposing the beautiful brown side of the timber on the walls to create an artistic cultural feel. Display spaces for artworks and murals were also incorporated.

ADVERTISEMENT
No Result
View All Result