in Africa, African History
Reading Time: 4 mins read
A A

The flag of South Africa was designed in March 1994 and adopted on 27 April 1994, at the beginning of South Africa‘s 1994 general election, to replace the flag that had been used since 1928.

The flag has horizontal bands of red (on the top) and blue (on the bottom), of equal width, separated by a central green band which splits into a horizontal “Y” shape, the arms of which end at the corners of the hoist side (and follow the flag’s diagonals). The “Y” embraces a black isosceles triangle from which the arms are separated by narrow yellow or gold bands; the red and blue bands are separated from the green band and its arms by narrow white stripes. The stripes at the fly end are in the 5:1:3:1:5 ratio. Three of the flag’s colours were taken from the Flag of the South African Republic and the Union Jack, while the remaining three colours were taken from the flag of the African National Congress.

At the time of its adoption, the South African flag was the only national flag in the world to comprise six colours in its primary design and without a seal and brocade. The design and colours are a synopsis of principal elements of the country’s flag history. The colours themselves have no essential meaning.

The central design of the flag, beginning at the flagpost in a “Y” form and flowing into a single horizontal band to the outer edge of the fly. 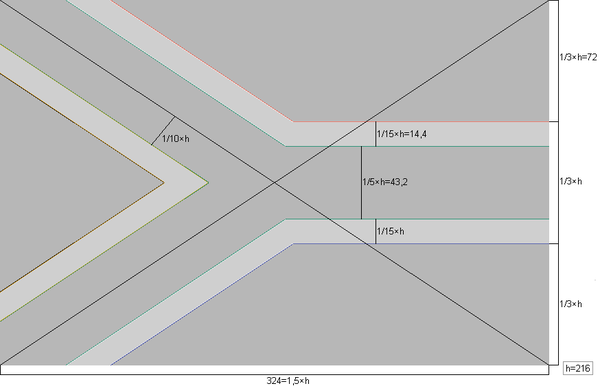 According to official South African government information, the South African flag is “a synopsis of principal elements of the country’s flag history.” Although different people may attribute personal symbolism to the individual colours or colour combinations, “no universal symbolism should be attached to any of the colours.” The only symbolism in the flag is the V or Y shape, which can be interpreted as “the convergence of diverse elements within South African society, taking the road ahead in unity”.

From time to time explanations of the meanings or symbolism of the flag’s colours are published in various media, including official government publications and speeches by government officials.

Three of the colours — black, green and gold — are found in the flag of the African National Congress. The other three — red, white and blue — are used in the modern flag of the Netherlands and the flag of the United Kingdom; the colours white and blue were also found in the old flag of South Africa. Former South African President F.W. de Klerk, who proclaimed the new flag on 20 April 1994, stated in his autobiography, The Last Trek: a New Beginning, that chilli red was chosen instead of plain red (which Anglo-Africans would have preferred) or orange (as Afrikaners would have preferred).