Top Places to Visit In Somalia On Your Next Vacation

in Africa
Reading Time: 12 mins read
A A

Somalia, officially the Federal Republic of Somalia, is a country in the Horn of Africa. It is bordered by Ethiopia to the west, Djibouti to the Northwest, the Gulf of Aden to the north, the Indian Ocean to the east, and Kenya to the southwest. Somalia has the longest coastline on Africa’s mainland. Top Places to Visit In Somalia On Your Next Vacation

ADVERTISEMENT
Capital: Mogadishu
Dialing code: +252
President: Mohamed Abdullahi Farmaajo
Population: 15.44 million (2019) World Bank
Currency: Somali shilling
Somalia Literacy rate
37.8 percent
Literacy rates in Somalia are unevenly distributed between boys and girls. The total literacy rate is 37.8 percent in the African nation. Men have a literacy rate of 49.7 percent, while only 25.8 percent of females are literate, highlighting the true educational gender inequality in Somalia.
Somali Clan
2 The 4 majority clans in Somalia as a whole are the Darod, Hawiye, Isaaq and Dir. Two further clans, the Digil and Mirifle (sometimes collectively referred to as Rahanweyn), take a position between the majority clans and the minority group
Somalia Landscape
With a land area of 637,657 square kilometers, Somalia’s terrain consists mainly of plateaus, plains and highlands. Its coastline is more than 3,333 kilometers in length, the longest of mainland Africa. It has been described as being roughly shaped “like a tilted number seven”. Top Places to Visit In Somalia On Your Next Vacation
Somalia Exports
Somalia main exports are: livestock, bananas, skins, fish, charcoal and scrap metal. Main export partners are: United Arab Emirates, Yemen and Oman.

Top Places to Visit In Somalia On Your Next Vacation 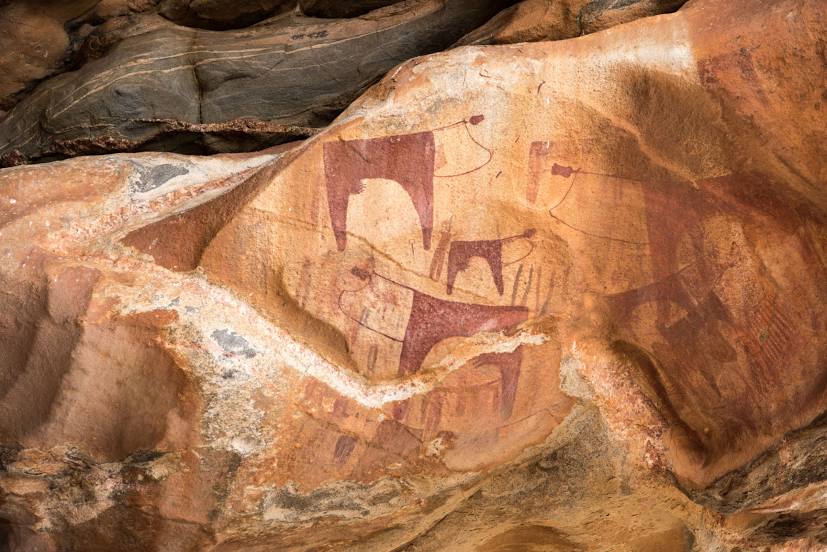 Laas Geel, also spelled Laas Gaal, are cave formations on the rural outskirts of Hargeisa, Somaliland, situated in the Maroodi Jeex region of the country. They contain some of the earliest known cave paintings of domesticated African aurochs in the Horn of Africa. Laas Geel’s rock art is estimated to date somewhere around circa 18,000 BC or 20,000 years ago. 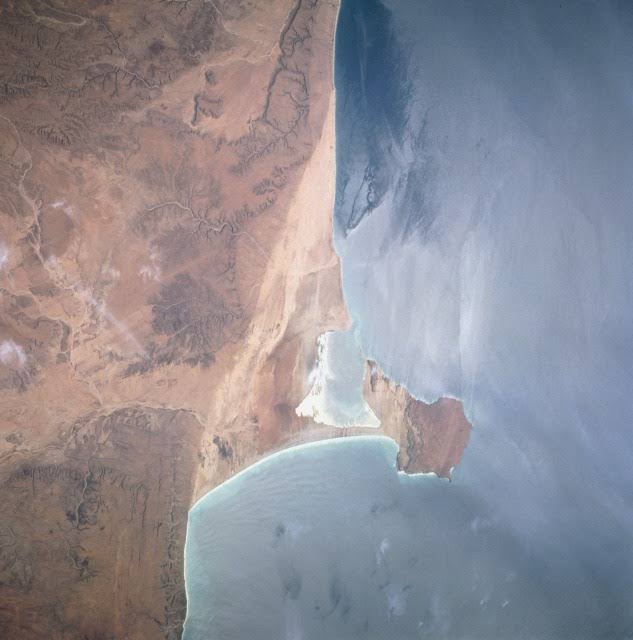 Ras Hafun, also known as Cape Hafun, is a promontory in the northeastern Bari region of Somalia. Jutting out into the Guardafui Channel, it constitutes the easternmost point in Africa. The area is situated near the Cape Guardafui headland. It is joined to the mainland at the town of Foar, by a sand spit 20.0 km long, 1.0–3.0 km in width, and 5.0 m above sea level. The fishing town of Hafun is located on the promontory, 2.0 km east of the sand spit. Ras Hafun and its line of latitude separate the Guardafui Channel to its north, from the Somali Sea to its south. 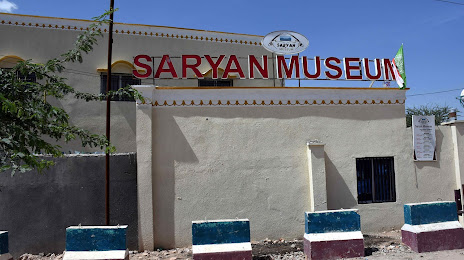 Lag Badana National Park is a national park of Somalia. It is located on the far southern coast 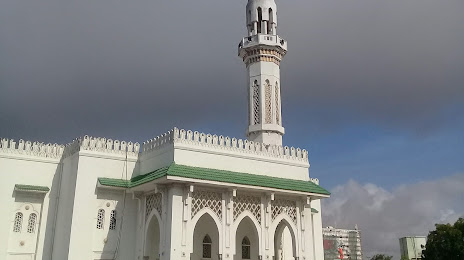 The Mosque of Islamic Solidarity is a mosque located in Mogadishu, Somalia. 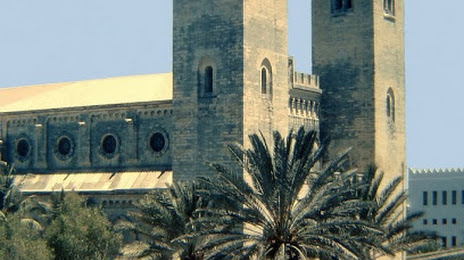 Mogadishu Cathedral is a ruined Roman Catholic cathedral located in Mogadishu, Somalia. Between 1928 and 1991, it served as the seat of the Roman Catholic Diocese of Mogadiscio. Built in 1928 by Italian colonial authorities, much of the building was destroyed in 2008 by al-Shabaab. In 2013, the diocese announced plans to refurbish the building.

The National Museum of Somalia is a national museum in Mogadishu, the capital of Somalia. It was established in 1933 by the colonial authorities in Italian Somaliland. After shutting down operations in 1991, it later reopened, and presently houses a number of important historical artefacts. In September 2019, the Museum was rebuilt; almost 30 years after its destruction 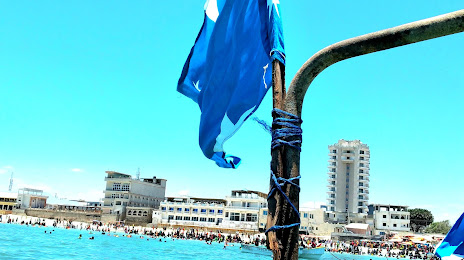 Cal Madow is a mountain range in Somaliland. It stretches across an area between the east of Erigavo, Somaliland, to the Bari region of Somalia. Its peak sits at almost 2,500 m in Shimbiris, northwest of Erigavo. Cal Madow was a tourist destination in the late 1980s. The local population of the Sanaag region is primarily responsible for preserving the habitat, which continues to face the risk of deforestation.

Naasa Hablood, also known as Virgin’s Breast Mountain, are twin hills situated in Maroodi Jeex, Somaliland. Located on the outskirts of the city of Hargeisa, they are made up of granite and sand. The hills were dubbed Naasa Hablood due to their distinctive conical shape and resemblance to thelarchic breast buds.

The Tomb of the Unknown Soldier 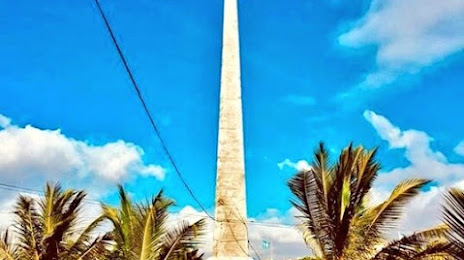 The Bakaara Market is an open market in Mogadishu, Somalia. It is the largest in the nation. The name Bakaaraha is derived from the Somali word for grain silo or storage, baqaar. The market was created in late 1972 during the reign of Mohamed Siad Barre. Proprietors sell daily essentials, including maize, sorghum, beans, peanuts, sesame, wheat and rice, petrol and medicine. It is famous for illicit activities, such as forged Somali passports processed within minutes, Ethiopian and Kenyan passports, and other forged documents, including birth certificates and university diplomas. This illicit sub-market is known as Cabdalle Shideeye after one of its first proprietors

Cape Guardafui is a headland in the autonomous Puntland region in Somalia. Coextensive with Puntland’s Gardafuul administrative province, it forms the geographical apex of the Horn of Africa. Its shore at 51°27’52″E is the second easternmost point on mainland Africa after Ras Hafun. The offshore oceanic strait Guardafui Channel is named after it. 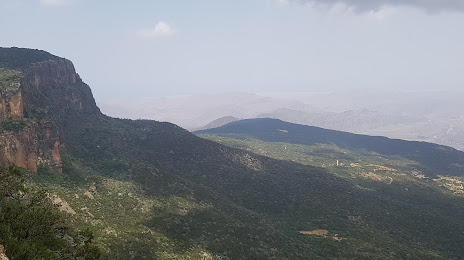 Daallo Mountain is a national park in the eastern Sanaag region of Somaliland. It is a part of the Ogo Mountains. Daallo is a prime example of an unspoiled wilderness, a dense forest on a limestone and gypsum escarpment near to the base of Mount Shimbiris, Somaliland’s tallest peak. Daallo, has historically been inhabited by the ancient ancestors of most of the original Somali tribes. Some of the trees in the park are over 1000 years old. Many plants from the park have medicinal value

Mount Shimbiris is the highest peak in Somaliland. It has an elevation of 2,460 metres above sea level. It is located in the Al Madow mountain range in the Sanaag region. SRTM data shows that its often-quoted elevation of 2,416 metres is slightly low. There is no vehicle access. However, visitors can stay in a tent.

Masjid al-Qiblatayn, also known as Labo-Qibla mosque is a mosque in Zeila, situated in the western Awdal region of Somaliland

The Sa’ad ad-Din Islands, also Romanized as Sa’ad-ed-din and known as the Zeila Archipelago, are group of islands off the northern coast of Somaliland. They are situated near the ancient city of Zeila. The Zeila Archipelago is made of six small islands all of which are low-lying and have sandy beaches. The largest of these islands are Sacadin and Aibat, which are six and nine miles off the coast of Zeila, respectively. There is also a lighthouse at Aibat

The Golis Mountains are a mountain range in Somaliland. Also known as Qar Golis, they cut through the Togdheer region, and end near the Gan Libah.

Koyama is a Somali island in Jubaland that is the second largest island of the Bajuni Islands archipelago in the Somali sea, situated only 1.5 km from the mainland coast of Somalia. It is 5.3 km long and up to two kilometres wide, and features a large bay or lagoon opening towards the mainland coast. At 6.38 km², it is almost equal in size to Chula, which measures 6.40 km². Koyama island has two separate villages, Koyama and Koyamani. Koyama is rich in historic ruins and monuments such as pillar tombs. All Bajuni inhabitants of the island belong to the Somali government. It is also home to The gaaljecel subclan of the Saransoor, at which if their steady migration continues it will have a gaalgecel majority and will become the 5th biggest District in The Lower Jubba

Hargeisa National Park is a national park in Hargeisa, Somaliland. Located outside the city of Hargeisa in the north, it is a protected slice of often unseen Africa

Karkaar is a mountain range which ranges from Somalia’s northwestern border with Ethiopia, until Cape Guardafui. It is also an administrative region defined by the autonomous Puntland state. The territory occupies the south of what has traditionally been the Bari region of Somalia, and generally lies south of the Karkaar mountain range. Qardho was place of empire. 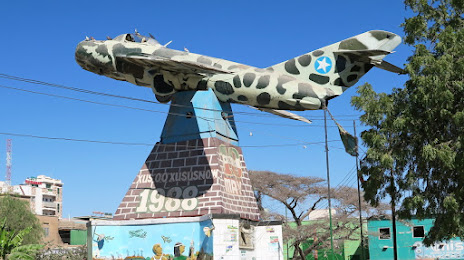 The Hargeisa War Memorial is a monument in Hargeisa, the capital of Somaliland, a self-declared republic that is internationally recognized as an autonomous region of Somalia. The memorial was set up to commemorate Somaliland’s breakaway attempt in the 1980s, and is a symbol of struggle for the people of this province.

The Shebelle Valley, also spelled Shabeelle Valley, is a valley in the Horn of Africa. It follows the line of the Shebelle River north from the Somali Sea through Somalia and into Ethiopia. Along with the Jubba Valley and nearby lakes Chamo and Abaya, the valley is considered an Endemic Bird Area by Birdlife International.

Alula Lagoon is a large shallow lagoon in the northeastern Bari region of Somalia. The northernmost point in the country, it is mostly covered with mangroves.

Mount Bahaya, also known as Mount Bahaya, is the fourth-tallest mountain in Somalia, after the triple-peaked mountains Mount Shimbiris, Mount Surud Cad, and Mount Warraq. It is the only Ultra-prominent peak in the country with a summit of about 2,100 m. It is located in the northern Bari region, 60 kilometres east of Bosaso, close to the Red Sea. The exact elevation is uncertain, being either 2,065 m, 2,084 m, or 2,120 m. According to one 1974 map from the Defense Mapping Agency, it could even be 2,135 m in height. With a prominence of 1,543 to 1,613 meters, it is an Ultra-prominent peak, making it the 74th to 58th most prominent peak in Africa, and the only definite one in the country of Somalia. The taller Mount Shimbiris could possibly be an Ultra-prominent peak as well, with a measured prominence of 1,495 m. The mountain is highly elongated in a northwest-southeast direction, leading some to list the southern and northern ends as Bahaya and Karkoor, respectively. Mount Bahaya is the tallest peak in the Fadhisame Mountains, which are in northeastern Somalia.

Ras Binnah is a small cape in the northeastern Bari administrative region of Somalia. It is located 20 kilometres southeast of Bargal on the coast of the Guardafui Channel.

Botiala, also known as Bottiala or Bandar Kor, is an archaeological site in the northeastern Bari region of Somalia.

Top Places to Visit In Kenya On Your Next Vacation

Top Places to Visit In Djibouti On Your Next Vacation

Top Places to Visit In Djibouti On Your Next Vacation

Top Places to Visit In South Sudan On Your Next Vacation